I’m sad for every casualty, but folks who know me know that there is a special place in my heart for the Pinnacle of Avian Evolution, the Louisiana Waterthrush. Today, not one but two of these splendid creatures met an untimely end in the southwestern alcove of the Noble Research Center.

I moved them off the sidewalk and into the nearby lawn as a removal trial. Both were evidently AHY-U.

My sadness, of course, is tempered by my scientific curiosity. Louisiana Waterthrushes are rarely encountered in passage. The routes and timing of their travels are largely presumed but seldom confirmed, and this is confirmation of both.  Whenever two individuals are found at a window, it is tantalizing to consider that they were traveling together, perhaps “chip”ping every few minutes to stay in contact.  If so, were these a mated pair?  Siblings?  From the same neighborhood?  Did they leave from the same area or meet up somewhere along the way? Was this an agonistic encounter, with one chasing the other?  Were they even together?  Perhaps they hit the window hours apart, and were not traveling together but just using the same route?

With every observation, the follow-up intrigues.

Here in my 21st year of monitoring buildings for window-killed birds, I have finally come across a Louisiana Waterthrush.  Folks who know me well will instantly recognize the special place this species holds in my life as the Pinnacle of Avian Evolution.  Here’s a presentation of mine that discusses waterthrushes as the focus of indicators of watershed condition: 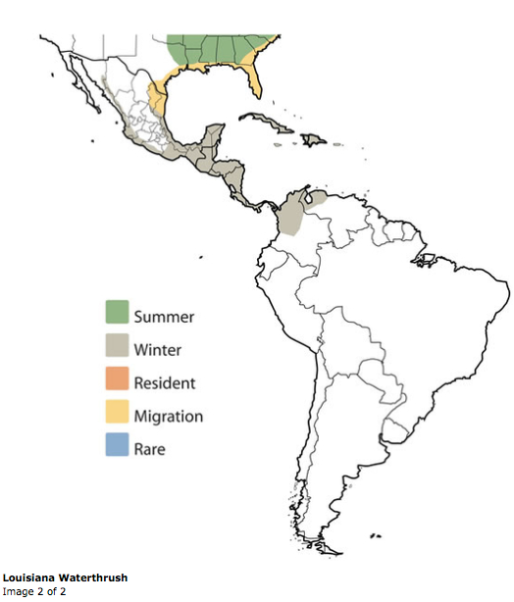 Among the many cool attributes of these remarkable birds, Louisiana Waterthrush is one of the earliest Nearctic-Neotropical migrants to arrive on the breeding grounds in spring.  I have observed these birds on breeding territories during a snow squall in Pennsylvania. They come back early, weeks before the big wave of other migrant warblers, breed early, and by the end of June become quite scarce.  Presumably, they seek sheltered locations for their annual molt for several weeks in late June and July, but by mid-July, many are well on their way south for the winter.  It is quite rare to see a waterthrush in fall migration, in part because they go so early but also because, unlike their close relative Northern Waterthrush, Louisianas so rarely are found outside a riparian zone.  Whereas Northerns will move with other flocks of warblers and can easily be found on migration at upland sites – including your backyard – Louisianas tend to really stick to the waterways, and they go it alone. The fact that this bird ended up at an upland site, in June, is quite unusual.

Here is today’s victim, bedraggled and rain-splattered from a quick cloudburst this morning, and where she met her end: 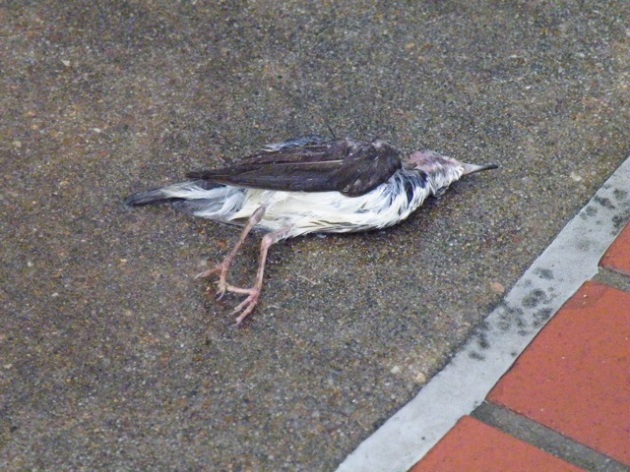 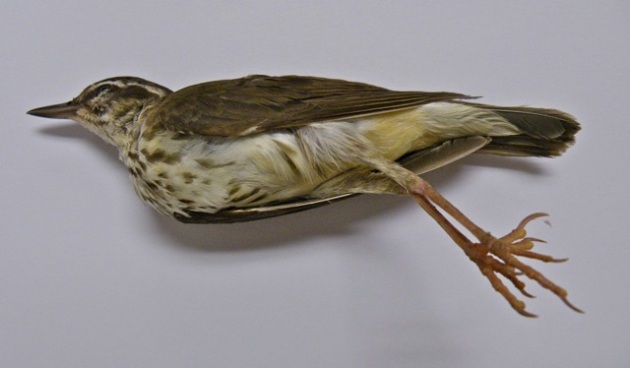 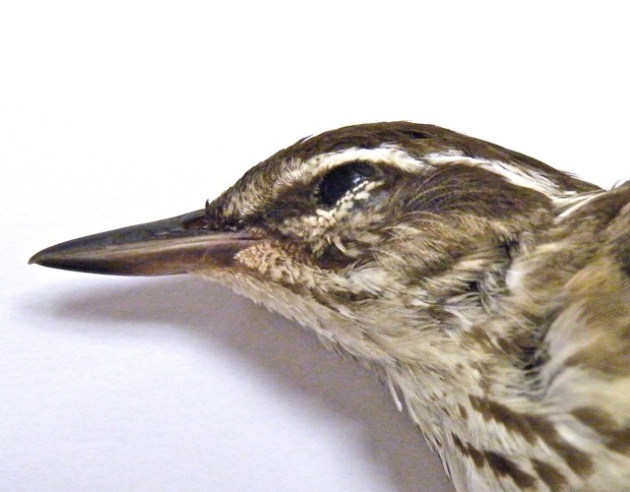 She was an ASY (after second-year) female with a brood patch.  She had no fat laid down.  It’s tough to tell if she was literally on her fall migration or just wandering around in a bit of post-breeding dispersal, but there certainly isn’t anything that remotely qualifies as “waterthrush habitat” in the vicinity of the Noble Research Center.  She also had not begun a pre-basic molt, which indicates that she’s probably not migrating yet. 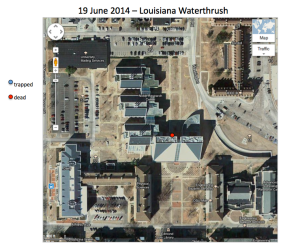 This is the second consecutive day in which a new species was added to the study (49 now).