Yesterday’s Chipping Sparrow had me worried: it was flitting about so nervously trapped beneath the south portico that I assumed I’d find it dead this morning, from exhaustion if not from something else. Instead, I was greeted today by 2 Chipping Sparrows stuck in that spot this morning.  Both are still moving fine and very active, but they’re going to have to figure out that flying down is their only way out.

As for the identification on these birds, I don’t have much to go on.  From up in the rafters, I get only very quick glimpses of oblique angles and undersides.  I managed these 2 photos today: 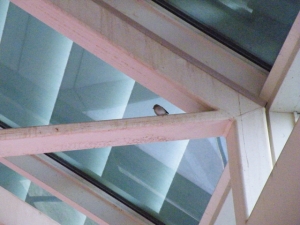 To separate autumn Chipping and Clay-colored sparrows, there are a few things on which to focus. In good light, I often rely simply on the warmer, buffier breast, flanks, and crown of Clay-colored to make the call, though I always prefer a clear view of the light brown rump, as opposed to Chippings’ gray rump.  There is a gray rump visible in one of my photos (not one I posted), all but clinching Chipping Sparrow as the proper ID.