Thanks to Corey and Katie for checking yesterday!

Yesterday’s powerful cold front gave us this morning’s Octoberish morning, and a big flight of migrants last night. Check out this explosion of migrants in the Plains from around 10:30 last night:

At least one of those migrants, a HY-U (prob female) Yellow Warbler, made it no farther than Stillwater last night.  She was in great shape with fat = 2. 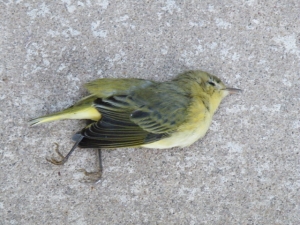 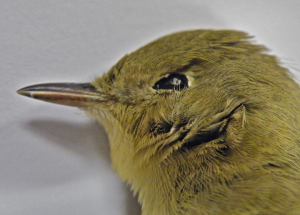 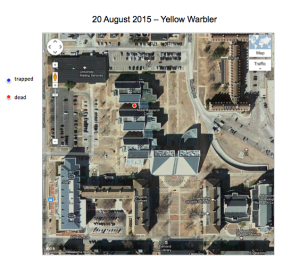 On the heels of an unusually powerful cold front – with temps struggling to the 70s! today – the Noble Research Center claimed its first real fall migrant this morning, in a HY-U Mourning Warbler.  This is the 7th Mourning Warbler on the project. This bird was young but it was in excellent shape and bulging with fat (scored a 3).  (Apologies for the non-standard photography.) 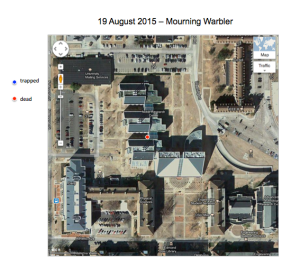 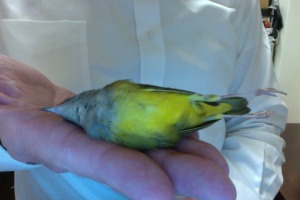 Here’s last night’s flight on radar.  Birds were on the move both ahead of and behind the storm. 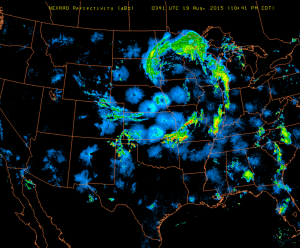 At least this poor fellow should make an interesting specimen with its symmetrical flight feather molt. 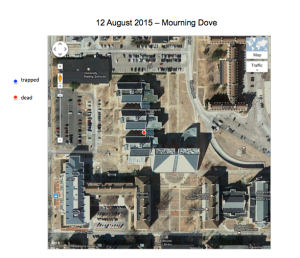 “Local” birds are technically hatch-year, but the distinction is that these are birds quite recently out of the nest and probably not yet dispersed from the natal range. In the case of an American Robin, those spot-breasted babies can rather safely be considered locals.  They’ll soon undergo their first pre-basic molt and look like their parents.

Northern Cardinal babies – locals – are easy to recognize too, with their dusky gray bills instead of bright orange sported by their parents.  A “female” cardinal with a dark bill is almost certainly a local young of the year.

Sadly, these locals are often not the greatest fliers (or “landers”, which might be more important), and two of them, a cardinal at the main north alcove and a robin on the corner of the straight north face, met their end this morning (actually on the 2nd based on a report I’d received).  The robin was both the first of its species found on this project and the first casualty for the north face of the building.  (Sorry, no photos).