This was an interesting case. I received a message late morning yesterday (thank you, OSU undergrad Cassandra Rodenbaugh) that there was a dead Lincoln’s Sparrow at the Noble Research Center in a highly conspicuous location. The bird was not there when I conducted my daily survey around 7:30 am, so it must have flown in since then. Normally, I might have dropped what I was doing to go collect the bird, but I wanted to check first with Scott Loss who, with his PhD student Corey Riding, are using data from the Noble Research Center for a more expansive study of window-collision mortality.  One of their current objectives is to check buildings for collision victims at different times during the day to address biases associated with survey time.  They have also been engaged in calculating scavenger removal rates and identifying scavengers using camera traps.

We decided that the best course of action would be for me to pretend I did not know about the bird and simply go about my business checking the NRC this morning as usual.  Corey and his team noted the casualty on their afternoon and evening surveys, and I saw from about 75m away as I walked to my car last night.

Despite this fresh, juicy, healthy Lincoln’s Sparrow sitting out in a highly conspicuous location on a sidewalk just outside a door, and despite the fact that I just photographed a cat at the NRC two days ago, there was the Lincoln’s Sparrow when I conducted my survey this morning: 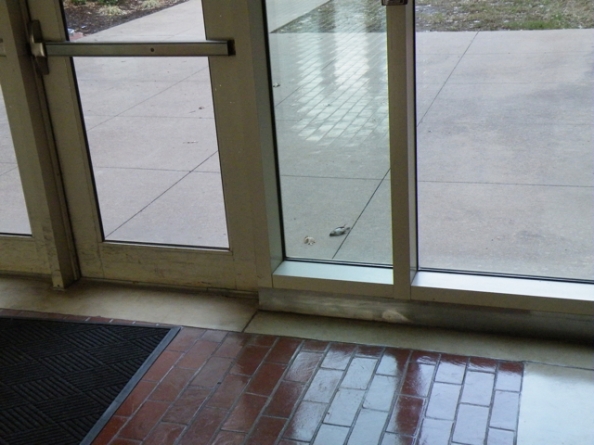 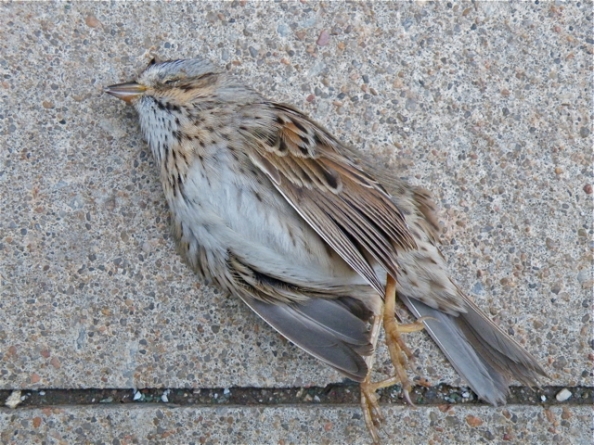 Other than the tiny ants getting to its eyeballs, the bird was untouched.  I have recorded it and will analyze it as a 4/23 casualty, even though we know that it was really a 4/22 (Earth Day) casualty. If the bird’s condition was any indication of others I’ve collected in a similar state (i.e., immaculate, but for some ant damage), then this suggests that several others I have collected as “day 0” birds might already have persisted unscavenged for the better part of a day.

The sparrow’s rects seemed fairly worn and tapered but I found no molt limit on this bird so I’m hesitant to commit to an age any more specific than AHY. The bird was in fine shape for migration with fat = 2.  A close examination of the bill tip will reveal an injury that suggests it was moving at high speed when it struck the glass.  Rest in peace, weary traveler. 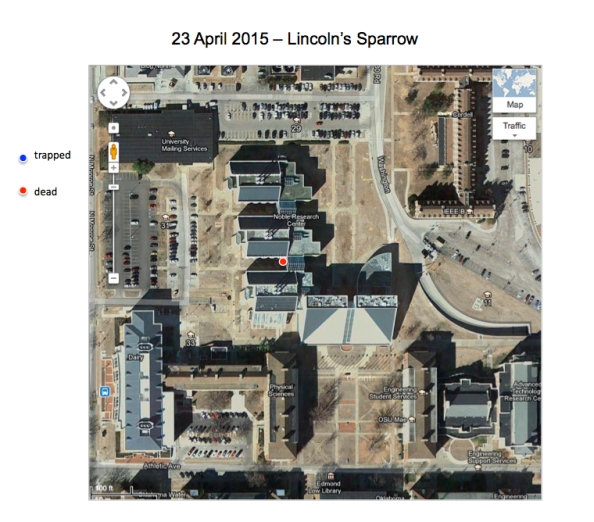 I was able to walk right past this curled up sleeping kitty cat on the north side of the NRC today.  It only took notice of me after I walked away and returned with the camera at the ready.

We’ve seen evidence that cats have been responsible for some scavenging, but this is the first time I’ve seen a live one at the site.  I also don’t have any evidence to suggest that this cat has scavenged anything.  From what I could tell, it was hunkered down enjoying a soft bed of fresh mulch in a spot out of the rain. 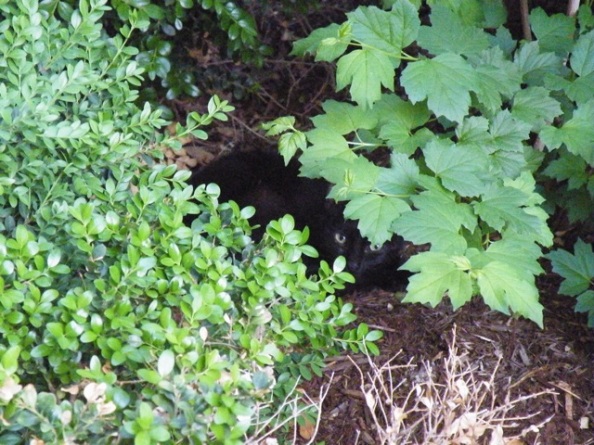 I think this bonus Big Brown Bat I found at the Food and Agricultural Products Center today is the 3rd such winged mammal I’ve found on a sidewalk in front of a window in broad daylight.  This one was feisty! 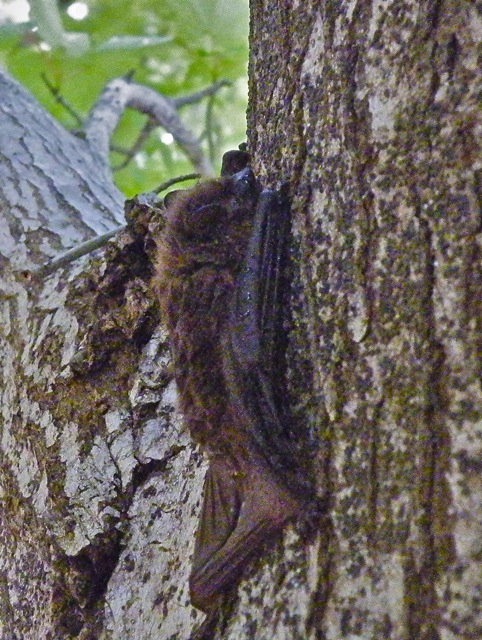 Today I found the first casualty at the Noble Research Center since late October, 2014:  a Northern Mockingbird at the northeastern alcove. This was one of those birds that would have been really difficult for me to overlook. 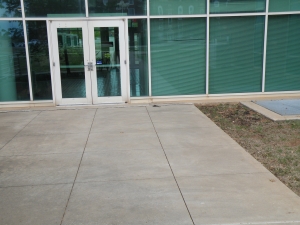 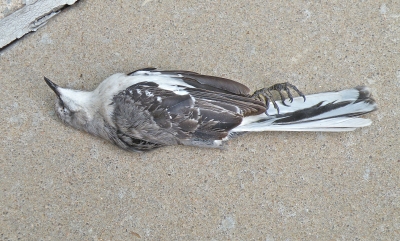 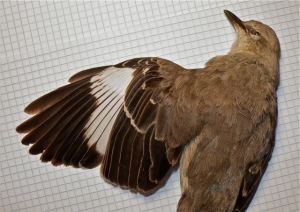 Now a mockingbird would presumably be a resident, and the mocker who seems to have laid claim to this corner of campus was singing his head off while I conducted my rounds.  Was this his mate?  Nope – my examination suggested that this was a male by his rather conspicuous cloacal protuberance.  Was it a local rival?  It would be pretty cool to think of the resident male driving this guy to his death my making him collide with a window.  I doubt that though and here’s why: this was the fattest mockingbird I had ever seen.  It was easy a “2” by my scoring, with the furcular hollow more than half full. The only reason I can see for a mockingbird to have accumulated fat would be if it was in passage.  This otherwise resident species was most likely an individual of that species on his way back north to some portion of the species’ range where mockers bug out for the winter.

Migration is fraught with difficulty and real danger.  Many birds experience the highest mortality of their lives while in passage.  For many, that risk is worth it for the chance to exploit some environmental conditions in spring and summer that are excellent for the production of the next generation.  For some like this guy, the gamble doesn’t pay off. 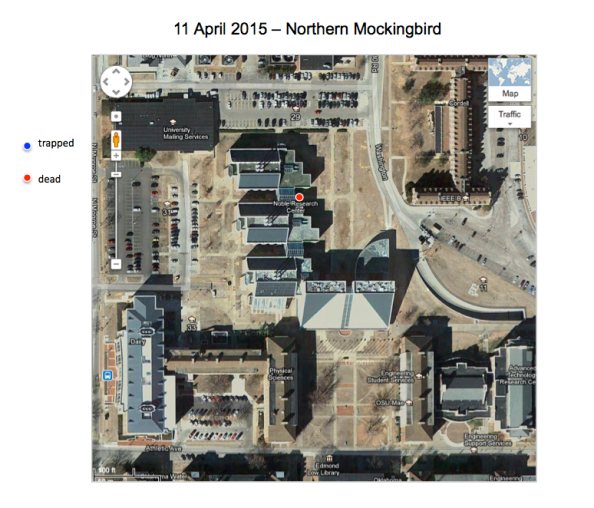 There were some Easter egg remnants around the NRC this morning, but thankfully no dead birds.

For the first time since Audubon collected two individuals in Kentucky in May 1811, the existence of his so-called Carbonated Swamp-Warbler has been confirmed!  Sadly, the last remaining Carbonated Swamp-Warblers struck a window and were stunned this morning, but before I could rescue them a neighborhood cat grabbed them and rendered this species extinct once again.  I was only able to make the following crude sketch before they were gone. 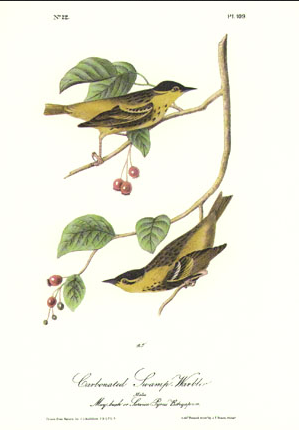