First, I’ll report today that the Nashville Warbler carcass is no longer in evidence.  That one lasted 9 days out in the open on a patch of lawn where it was stepped on, run over, etc. likely multiple times.

Next is a bit of a pickle – I conducted my daily survey about 7:45 this morning, just as the sun was rising.  There were no casualties.  About 2 hours later, I received word that a cardinal had expired at the north entrance.  Strictly speaking and for an analysis of my observer detection rate, I should not include the bird as a datum from my surveys.  This would instead be a case of me coming back tomorrow to potentially find the bird were it to last the roughly 24 hrs between surveys.

Personally, I’m more interested in reporting as completely as I can what birds show up at the NRC.  With Homecoming Weekend upon us, I’m not confident that the bird would have lasted in place until tomorrow morning, so I went to collect it and here it is.  This bird marks the 34th casualty of 2014. 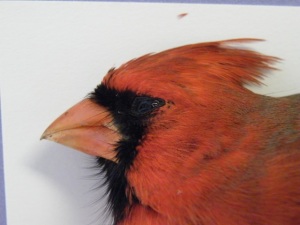