This morning, I found a Wilson’s Warbler at the north entrance.  This example illustrates well the difficulty in ascribing a bird as a casualty or as merely “trapped”.  In this case, it is clear that the bird was stunned from an apparent collision as opposed to merely exhausted from repeatedly trying to fly through what looks like an open passage. Check out its tightly shut eyes until I was right up next to him. 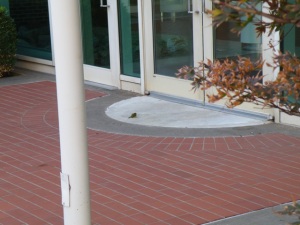 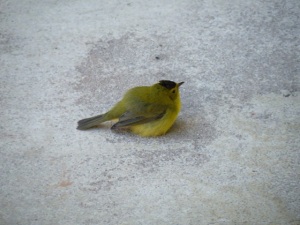 Had I been a bit quicker or more stealthy (like a cat), this moment of surprise would have been the bird’s last.

I had almost got my hand on him when the bird flew to the back of my left pant leg (where he stayed for a second or two), before he flew (a bit wobbly, but airborne nonetheless) to the “Recuperation Tree” where so many birds stunned by collisions with the NRC spend some time.  Despite his obvious closed-eyed distress, he flew and perched strongly in the tree, so I count him as trapped and survived rather than as a casualty.  He’s not out of the woods yet, however, and he’d certainly be an easy meal for even a clumsy and inexperienced predator.

This is the indirect cost of building collisions.  So far in 2014 I’ve documented 26 birds killed at the Noble Research Center, but I’ve had 11 trapped birds as well.   Of those 11, surely some would have survived the experience without my intervention, but how many?  What is their prognosis after escaping the the NRC?  For many of these birds with whom I have the ability to interact for a few moments, I can tell that they are not nearly 100% just because they’re too fast for me to catch or can sort of perch normally. 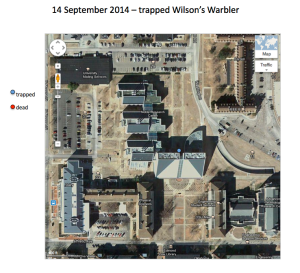