Our first decent cold front of the summer came through last night just as the sun was going down, and this one brought some actual rain.  Thus, by about 9:00 pm, conditions were ripe for a major fallout of migrants as the ceiling lowered and the rain and storms moved in.  At time of writing, we’ve now had about 13 hours of steady rain. From Paul Hurtado’s radar ornithology page, these images show the impressive flight underway last night and the rain slicing through central Oklahoma that was forcing birds down.

In this image from about 7:00 this morning, the rain hasn’t really moved but the birds have largely put down for the day.

While that rain was starting up last night, I heard an Upland Sandpiper and multiple Dickcissels passing over. This morning at dawn, Common Nighthawks were flying around my neighborhood, and the Dickcissel flight calls were incessant.

By about 9:00 am, I had walked into campus (about a mile from my house) and already found a road-killed Sora.  At the NRC, there were numerous Chimney Swifts flying about, and the usual European Starlings and Great-tailed Grackles.  I also found two Mourning Warblers not quite trapped at the main north entrance to the NRC, and some other warblers moving through the trees.  The steady rain and my lack of binocs made positive ID difficult.

Sadly, I had no problem identifying the two casualties I found at the building today:  both male Wilson’s Warblers and both in excellent condition for migration, bulging with fat in the furcular hollow and on the belly (fat = 3). One (the HY male – just a few months old) was at the southeast alcove and one (the AHY male – at least 13 or 14 months old) at the southwest.

The little dears were pretty waterlogged, so they spent some time in front of my space heater this morning. 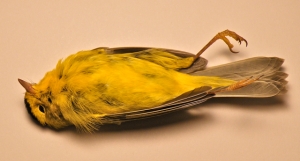 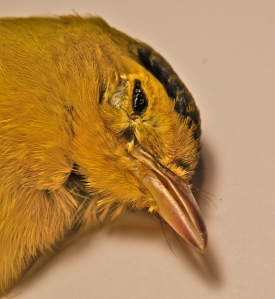 HY (left) and AHY (right) male Wilson’s Warblers illustrating the progressive change in the extent and evenness of shiny black color as these birds mature. Had the bird on the left survived to next year at this time, he would’ve gone through a complete molt next summer that would leave him looking a lot more like the male on the right.