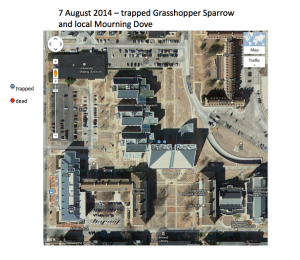 I’m quite conservative when it comes to Mourning Doves around the Noble Research Center. This is one locally breeding species that can sometimes be found just hanging out near the building but not really trapped by it as our migrants often are. Our recent fledglings (“local” birds in bird-banding parlance) seem sometimes to seek out these protected places until they become stronger fliers and when i find them thus I almost never document them as “trapped.” 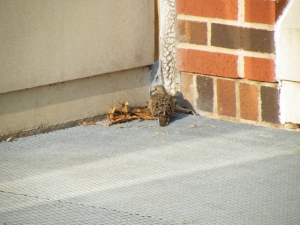 Almost never. Today, I found one of these local Mourning Doves that flew up and away from the north entrance and right into a window in the southeast alcove. Then it flew back toward the north entrance and banged into the windows there again. In all, I watched hit windows (low-speed crashes, but still) three times before it headed off a bit further from the building and out of what I considered immediate danger. Given its behavior, I’m counting it as trapped. There was a second local bird as well, but at no point did it fly into a window or seem in any way impeded by the structure of the building so I did not count that one as a trapped bird.

A more obvious trapped migrant was the Grasshopper Sparrow I found at the north entrance. It took a bit to get that one out of harm’s way too, but ultimately I watched it take off and fly strongly to a spot about 300m north of the NRC from where I hope it can get its bearings and be on its merry way. 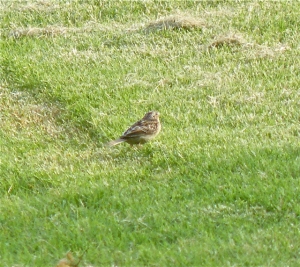