Not long after returning with some negative data for the Noble Research Center today, I received a call that there were two dead “gray and yellow” birds at the OSU Multi-Modal Transportation Facility.  This is about a par-4 drive from the NRC, just to the north across Hall of Fame Avenue.  It’s a building with a good bit of glass, but it also presents a hazard away from the building itself: glass bus stops.  Here was the offending one today. 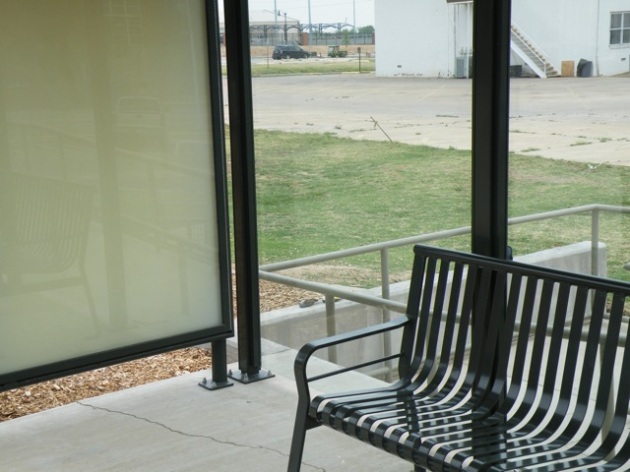 And here, its victims: two Western Kingbirds.  They might have been carried away in springtime romance when they collided, maybe they just met.  More likely they have a nest underway in the vicinity, as most other kingbirds on campus seem to be on eggs but haven’t started incubation. 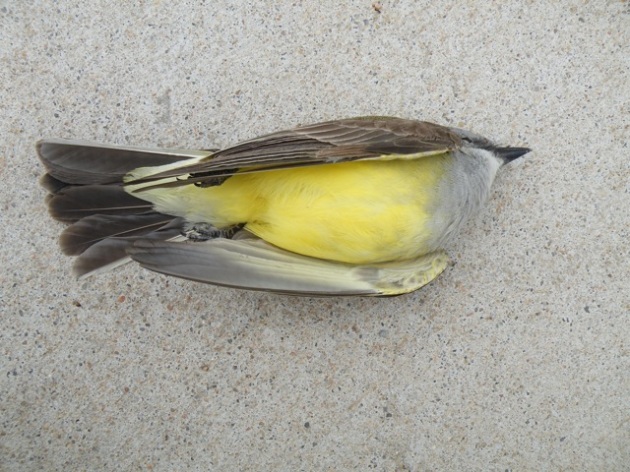 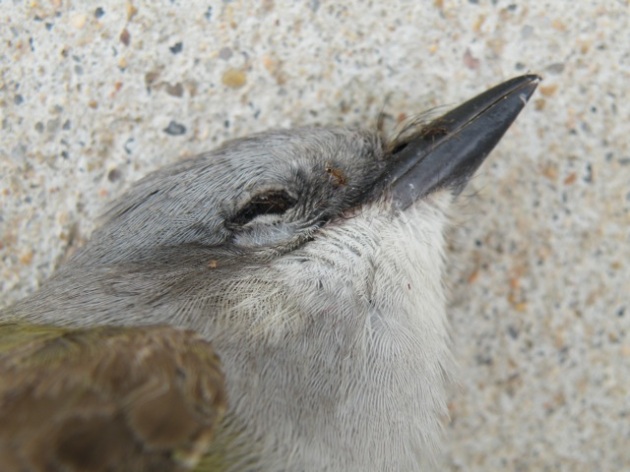 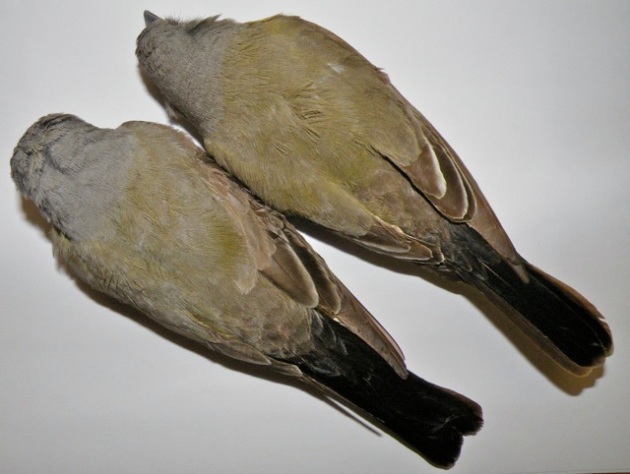 The birds gave me a chance to study Western Kingbird a bit more closely.  Check out the male’s flaming crown patch (the female had one that was smaller and more of a dull orange). 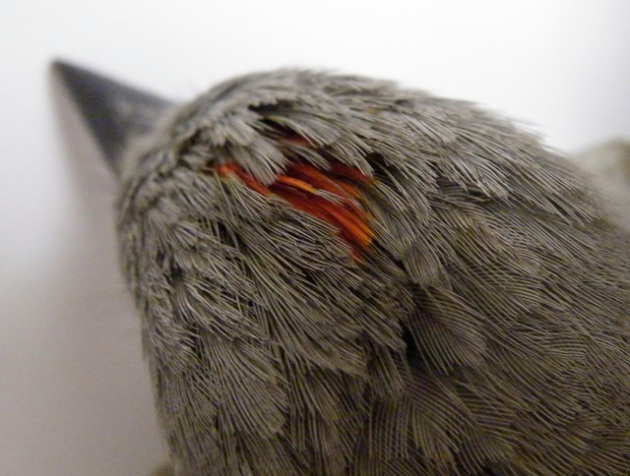 Ageing and sexing kingbirds was, I learned, a fascinating prospect.  I used (in part) these criteria from Pyle: 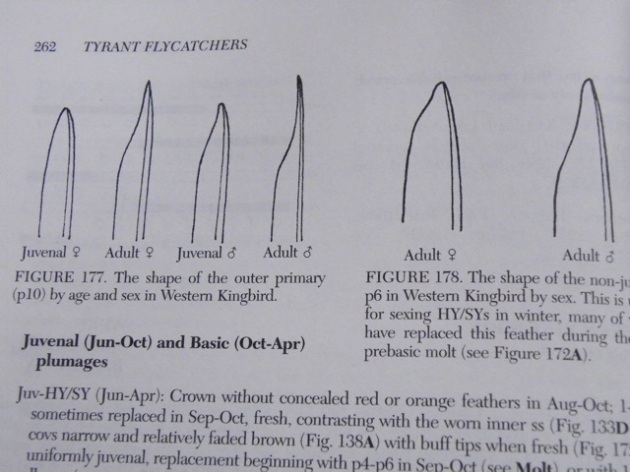 Tyrannind flycatchers are “primitive” members of the Passeriformes, meaning that they retain ancestral characters. One of those is that, unlike most songbirds you know that have 9 primaries, Tyrannids have 10.  In the case of Western Kingbirds, the shape of the tip of that 10th primary is useful for determining age and sex.  It’s long, emarginated, and exceedingly narrow in adult males and correspondingly shorter and more broad in adult females and younger males.  The same goes for the shape of primary #6.  Here are photos of p10 and p6 for the male: 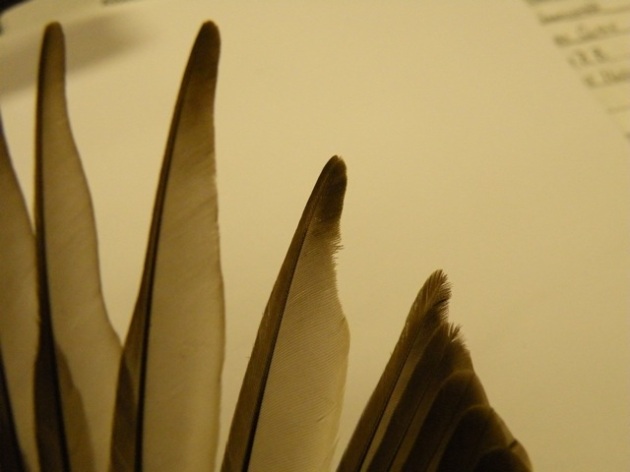 Here are those same feathers on the female: 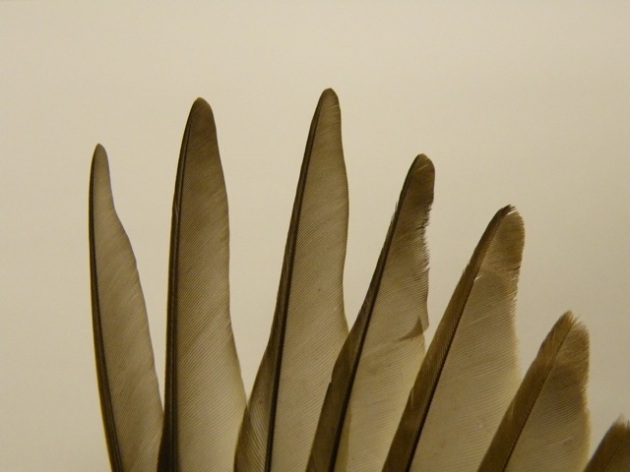 I aged the male as ASY.  He weighed 42g but had no fat laid down.  His CP = 1, his wing was 126mm and his tail was 87mm.  The female (also fat = 0) was an SY weighing 38g.  Her BP = 1, and her wing and tail measurements were 119 and 82mm, respectively. As further evidence that the female was SY, check out the contrast between her molted and replaced central rects (the black ones with the white shaft) and those poor, dusky brown and worn other tail feathers that she grew in the nest somewhere last summer:

I welcomed Scott Loss and his new student Corey Riding on my survey this morning.  Our combined bird-finding mojo did not reveal any window-killed birds which is good, even if it meant for a rather boring first field trip in Stillwater for Corey.

I’ve seen a lot of surprising things on this project, but this morning’s weirdness takes the cake.

First I came upon this fledgling Mourning Dove up against a door of the building.  I don’t count local birds as trapped, but I still thought it best to move this bird to some trees not far away. 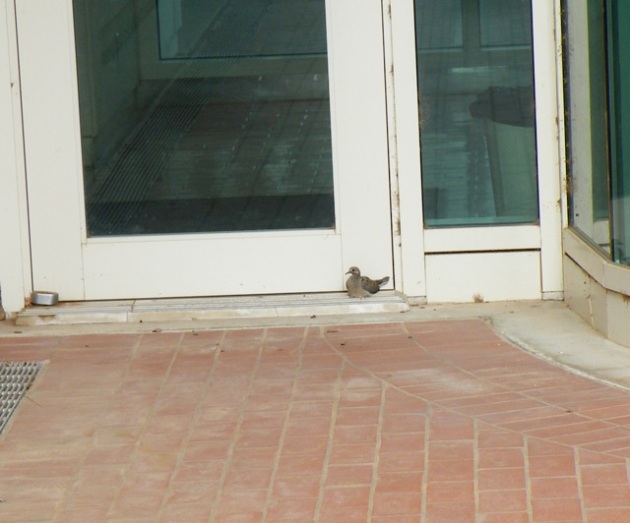 That’s not the weird part, this is: 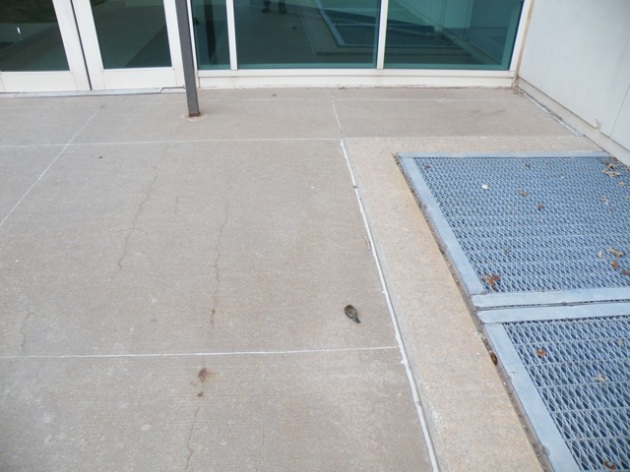 It’s another female Indigo Bunting.  Upon closer inspection, however, this bird was in worse shape than it should have been as an overnight casualty.  The ants were enjoying it, but certainly they wouldn’t have had time to do more than process the bird’s eyes.  This bird didn’t have eyes.  It also lacked a beak, the base of the skull, and half of its thoracic cavity!  It was floppy to the touch – no rigor mortis – but its feathers were only loosely attached.  This wasn’t a bird that was so fresh that it hadn’t entered rigor mortis yet, this was a bird that had long since come out of rigor mortis to go soft again, i.e., something several days old at least.

I’m at a loss to explain the movement and yesterday’s absence other than that this bird was scavenged and removed once, but not destroyed and eaten.  Whatever took it then left it in this new location.  Now the 6-day scavenging trial is about to be extended.  Stay tuned . . .

No sign of any new casualties today, and no sign of the Indigo Bunting that lasted for 6 days.

Science can be messy, especially when the subjects are living beings outside of a laboratory setting.

Here’s the latest illustration of this principle:  If you had asked me last week if Indigo Bunting was a species that commonly shows up in my surveys for window-killed birds at Oklahoma State University’s Noble Research Center in Stillwater, I would have responded that I’ve found a few, but not an unusually high number of them. Indigo Bunting was the 10th most frequently recorded species on my surveys. From August 20, 2009 to May 4, 2014, I had only found 4 individuals of this species.  So in nearly 5 years I had found 4.  I would have been pretty confident in those 5 years of data, too.  After all, that’s the value of long term ecological research.  It provides a greater opportunity than in short term studies to identify patterns in data, including unusual events.

Speaking of unusual events, we’re in one now: Since, May 4th, I’ve found FIVE Indigo Buntings dead at the NRC. In five years I found 4 individuals; in the past week I found 5.  Oh, and all 5 have been females.  Today’s was an ASY female with fat = 0. 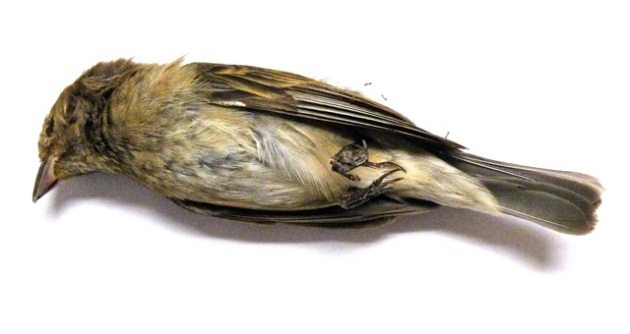 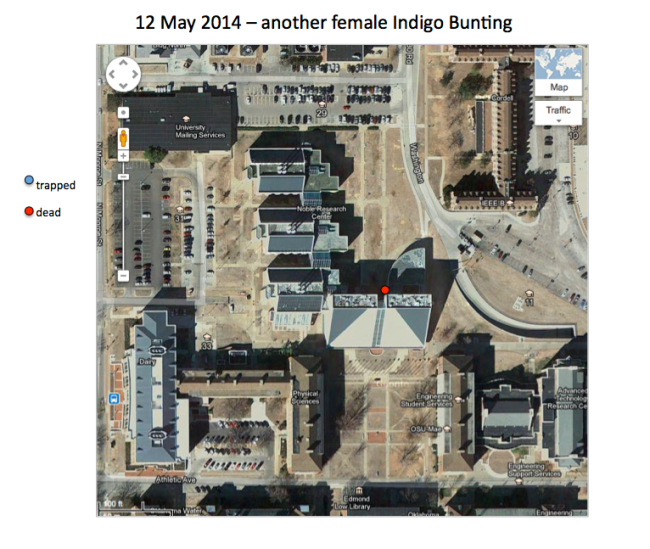 In other news, the Clay-colored Sparrow is now gone without a trace (it lasted 5 days), but the Indigo Bunting I left out yesterday has not been touched.

This morning, the Clay-colored Sparrow was in place and had not been touched.  I was happy to not see a Gray Catbird, Painted Bunting, or Wilson’s Warbler limp on the ground, which means that I was at least successful yesterday in getting those birds away from the building.

There were, however, three new casualties today.  First, there were two female Indigo Buntings, one in the southeast alcove and one along the north facing wall.  I collected one and left the other in situ.  The one I collected was an ASY female with fat = 2. 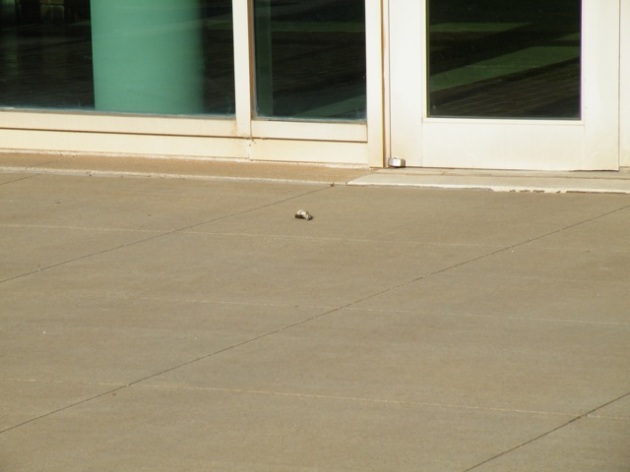 In the southwestern alcove, I found this gorgeous ASY male Yellow Warbler.  This one had no visible fat, making me wonder if he exhausted himself as a trapped bird rather than dying suddenly from impact trauma. 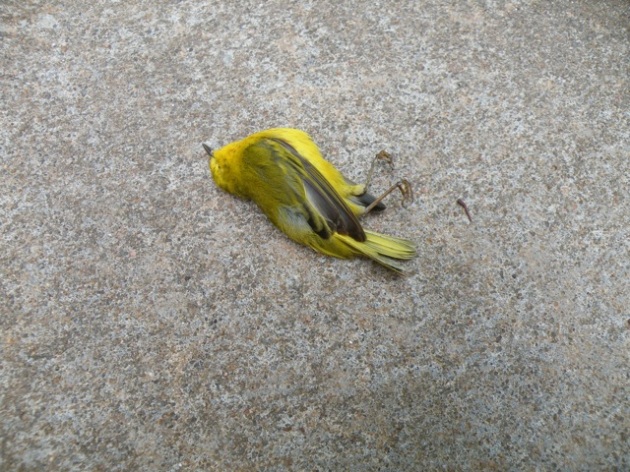 Here they are together prior to internment in my freezer:

Lots to explain today.  First, I’ve got to go all the way back to the Sprague’s Pipit from March of 2010 to find the last casualty near the northernmost entry to the Noble Research Center, i.e., the red dot on the map below:

I think the fact that casualties do show up in these odd places now and then simply highlights all the more how the various shapes presented by the Noble Research Center play a huge role in the pattern of collisions.  I have conducted hundreds of surveys since 2010 without a single bird dying at that weird spot on the building, but other locations really do seem to draw them in.  More on that in a bit.  Here, though, is the unfortunate Clay-colored Sparrow I found at that spot this morning: 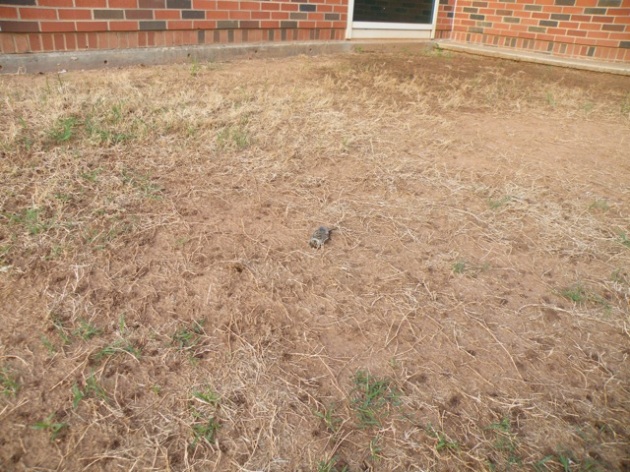 It’s not much to see, I know.  That’s why I think I overlooked this bird for two days.  It was in pretty good shape, but it wasn’t in immaculate shape. The bird was face down on the ground and had some dried mud splashed up on its back.  This tells me that the bird likely came in Thursday morning during our overnight storms.  Alternatively, it could have gotten wet from the sprinkler system and then subsequently dried.  I’m going with the notion that it was a casualty during the storms and that I missed it for two days.  Anyway, I left it in place to see how long it lasts.

The other two birds I found this morning were exhausted, but very much alive and apparently uninjured. The first was a beautiful female Painted Bunting trapped in the southwest alcove.  She was slow enough for me to catch her and I released her into a tree away from the building where she flew on her own and seemed to perch just fine. She was carrying zero fat, so I’m hoping that she can find an easy meal.

I’m a little more worried about this Gray Catbird at the very-busy-this-week northwest alcove.  This bird was active enough that I couldn’t catch it, but it also didn’t fly more than a foot or so off the ground and any farther than about 10 m at a time.  I herded it out to beneath a tree where a robin was foraging so maybe it too will find some food quickly.  I won’t count either of these birds as casualties – unless I find them again tomorrow.  These are the days when I feel the greatest reward for the methodical daily surveys I do. Any day I can help keep a Painted Bunting going a little bit longer on this earth seems like a good day to me. 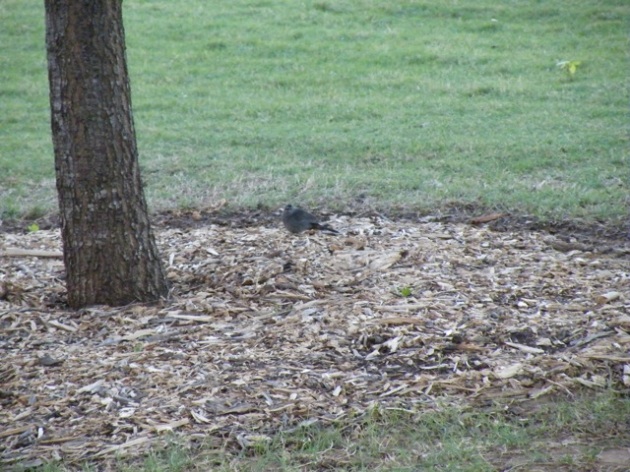 From two casualties since December to five just this week, it looks like migrant activity has picked up at the Noble Research Center.  The northwest alcove was deadly last night for the third time this week, and I flushed a migrant Wilson’s Warbler from there this morning too. Today it was an unfortunate Clay-colored Sparrow (SY-U, fat = 3): 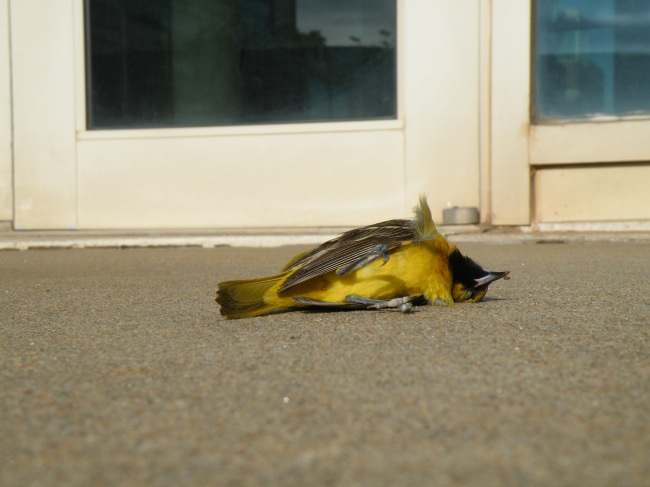 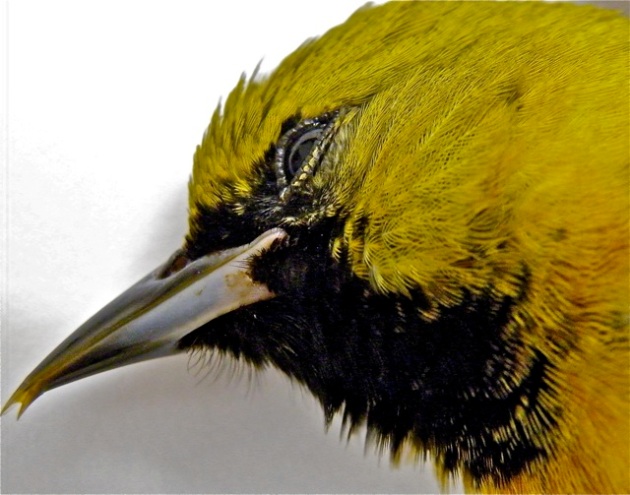 This is the second of these beautiful orioles that I’ve found dead at the NRC, and both were SY males.  Both also broke the tips of the bill on impact, illustrating both how delicate that structure is on this species and how birds hit glass with no idea that there is a barrier in front of them. 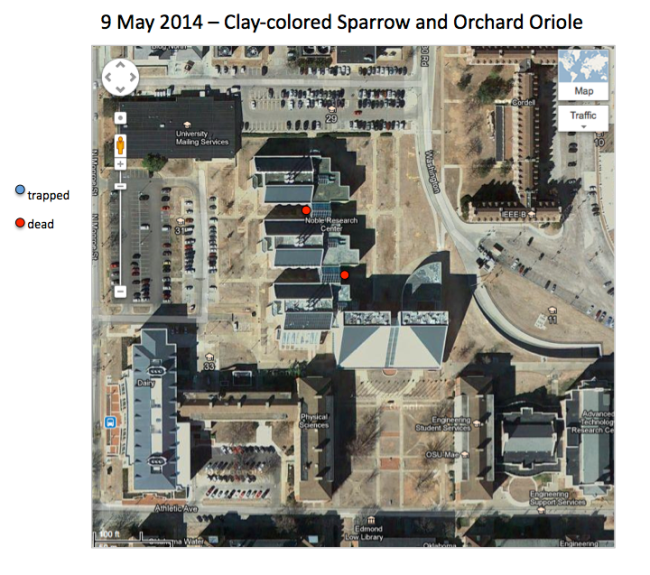 I found this bedraggled Gray Catbird at the northwest alcove of the Noble Research Center this morning, following a highly unusual event overnight: rain. 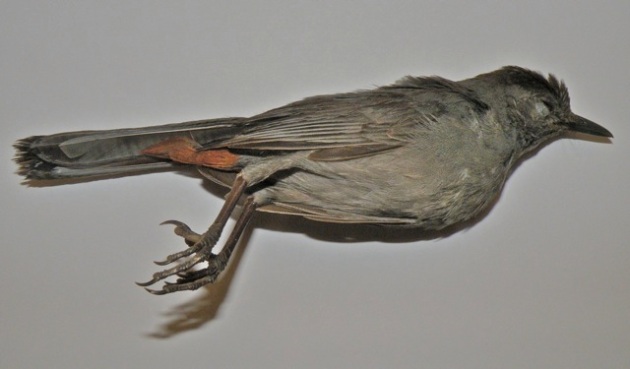 The bird appeared to be second-year, and not carrying any discernible fat.  Sex wasn’t obvious either; that will have to wait until I have time to take a closer look during specimen preparation.  This is just the second catbird I’ve found at the NRC.  Catbirds are not that easy to find in Stillwater.

Casualties have seemed remarkably low this spring.  As a conservationist I’m grateful for that, because fewer dead birds is a good thing.  As a scientist, it bothers me a bit, because every time I get complacent enough to think I might understand mortality patterns of avian window collisions at the Noble Research Center, the data throw me a curve ball.  In truth, the spring of 2013 was a bit like this too:  strangely low mortality during April when it seemed like the bulk of migrants were passing through, but then a flurry of casualties through May – and into June – when out birding it seemed like migration was really at an ebb.

This morning I had the good fortune to collect data on the misfortune of these two, female Indigo Buntings. Beginning birders take note of these small, drab, brown “sparrows” you might be seeing all summer long, because they rarely sport enough indigo to rely on color for their identification. 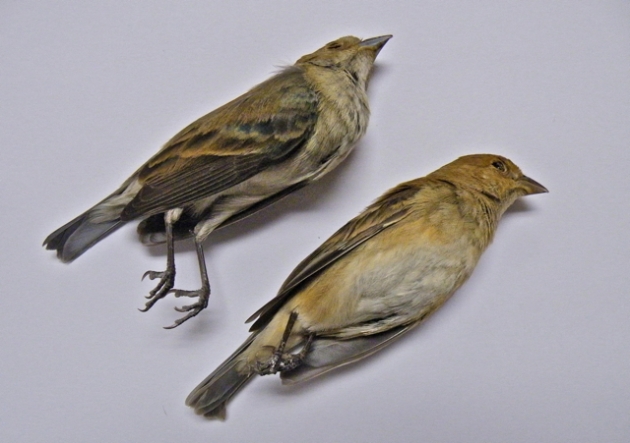 I aged both to after second year based on primary covert shape, and both were carrying some fat but not a lot.  I coded them = 1.  Neither had brood patches.  It can be tempting to picture them traveling together last night, perhaps in a small flock of Indigo Buntings, but they ended up on different sides of the building.  Also, the top bird in the photos was pretty stiff – as if she had hit several hours before the bird in the bottom, who was limp and seemed just barely lifeless in the hand.  Here is where they ended up: 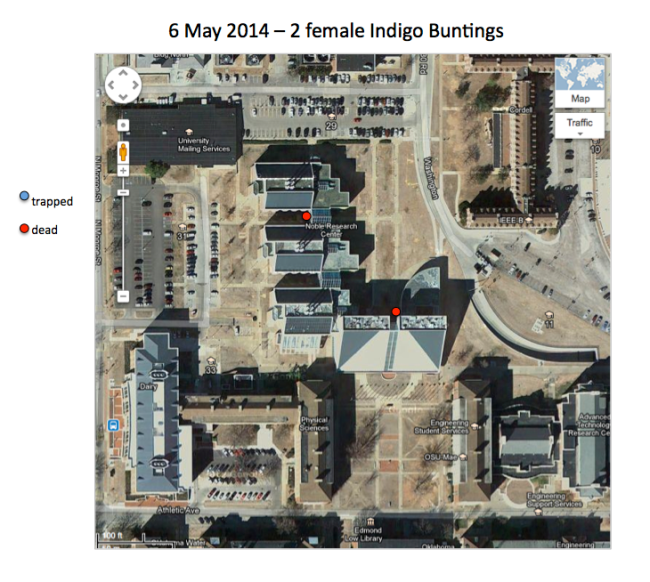 Like so many others, they were oddly placed for spring migrants:  Why on the north and west sides of a building when presumably they had come from the south, and likely southeast?  I can only picture some kind of local movements that are multidirectional as birds are finding safe spots to put down for the day, and the funnel-like shapes presented by the Noble Research Center draw birds in and, unfortunately more often than not, to their doom.