Mockingbirds are resident on campus, and they seem pretty savvy about windows and other hazards. I’ve got two that come to my window sill each day for a treat of raisins, and their songs and wing-flashing antics are even occasionally noticed by the muggles walking around between classes.

The unfortunate fellow above, however, had his life cut short by a window collision.  He was not in an area where I am aware of a resident pair, so it’s possible he was a migrant. He did have some fat in his furcular hollow (“1” on a 1–3 scale), and his cloacal protuberence was not so enlarged as to indicate heavy breeding activity.

Mockingbirds are considered year ’round residents within their range:

. . . but I think there must be some at least local movements within that distribution.  Check out this comparison of winter (Dec.–Feb.) and summer (Jun.–Jul.) distribution from eBird. 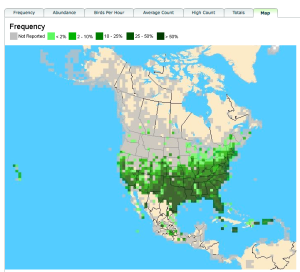 It looks to me like there’s some vacating of territories in winter in the arid West and the northern breeding range in the Plains.  Perhaps my bird was heading back to a breeding territory in Nebraska.

Whatever his cause to be at the Noble Research Center today, however, his purpose will not be realized. We’ll make sure that at least his body will be donated to science.